The Kennedy Family, by Scott Cooper Florida (Miami), is a story of American royalty and a great American dynasty. For 64 years, Washington had at least one Kennedy in public office. Joseph P. Kennedy, the family patriarch and father of JFK had descended from Irish Catholics who fled the potato famine.  In addition to popularity and political power, the Kennedy clan has had more than its fair share of tragedies. Several members of the household have died in accidents and assassinations, in what has been come to be known as the “Kennedy curse.” 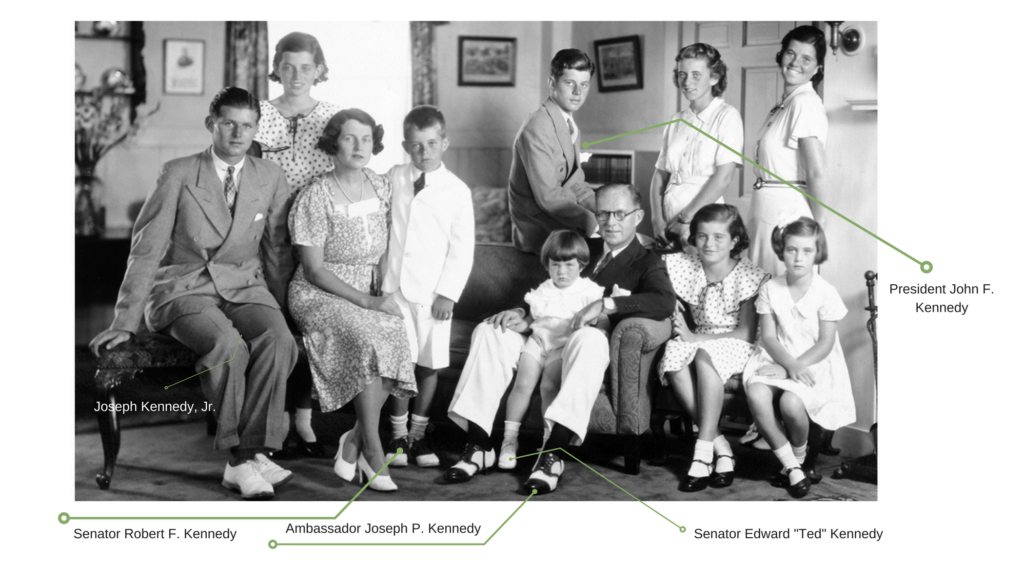 How is it possible for one family to suffer as much tragedy?

For some, the string of untimely deaths and scandals in President John F. Kennedy’s family might appear too unlikely to chalk up as bad luck.

In fact, JFK’s brother, the late Sen. Edward “Ted” Kennedy, actually wondered out loud if his family were victims of an “dreadful curse” — as though curses could be real.

Many people know about the assassinations of President Kennedy and his brother Robert F. Kennedy in the 1960s. However, depending upon your generation, these other terrible events within the Kennedy clan might not be so well known.

This tragedy happened during a campaign flight from Washington to Westfield, Massachusetts. Ted Kennedy was flying with a fellow senator, the senator’s wife and a legislative aide. The pilot and aide were killed. Low clouds and fog made flying difficult as the airplane approached Westfield’s airport. The plane lost altitude and crashed in an orchard not far from the runway, killing the aide and the pilot. Kennedy suffered a broken back and ribs.

President Kennedy’s oldest brother, Joe Kennedy Jr., died in a 1944 air disaster, after committing to pilot a secret and incredibly dangerous World War II bombing mission in Nazi-occupied France. During the mission, two in-flight explosions rocked his bomber aircraft “leading to the death of both pilots,” according to the JFK Presidential Library. The cause of the explosions remain a puzzle.

Four years after the Kennedy Family lost Joe Jr. and another plane crash killed President Kennedy’s sister Kathleen “Kick” Kennedy. Kick Kennedy had married William Cavendish, England’s Marquess of Hartington, giving her the title Lady Hartington. In 1948, she and three others died when their small plane crashed in France while flying in a storm. She was 28.

It was known simply as Chappaquiddick, the tragedy that followed Ted Kennedy during his political career. Chappaquiddick was the Massachusetts island where effort worker Mary Jo Kopechne died in a 1969 car crashes, with Kennedy in the wheel.

Kennedy was driving Kopechne home after a late-night party when he lost control of the vehicle and crashed into the water. Kopechne was trapped inside the car but Kennedy was able to swim ashore and walked back to his hotel. He did not alert police until 10 hours later. Finally Kennedy pleaded guilty to leaving the scene of an accident and received a two-month suspended sentence.
He went on national TV to describe the catastrophe, saying, “All kinds of scrambled thoughts … went through my mind … including such questions as … whether some horrible curse did actually hang over all of the Kennedys.”

David Kennedy, child to Ethel and Robert F. Kennedy’s,, died in 1984 at a Palm Beach, Florida, hotel after a drug overdose. He had reportedly watched his father’s assassination on live TV as a boy and later struggled with addiction.

Another son of the late Robert F. Kennedy, Michael Kennedy, died in a ski accident in Aspen, Colorado, on New Year’s Eve, 1997. The New York Times reported he was tossing a football with relatives while skiing down a mountain. The father of three was 39.

In 1991, Ted Kennedy was forced to announce a bar-hopping weekend near the family’s vacation home in Palm Beach, Florida, that resulted in sexual battery charges against his nephew, William Kennedy Smith. Smith was accused of raping a woman he and the senator met at a trendy nightclub called Au Bar. Finally Smith was acquitted of all charges. Cable news channels supplied virtually nonstop coverage of testimony, creating fodder for the tabloid press, much to the chagrin of the Kennedy family.

Most news outlets decided not to identify Kennedy Smith’s accuser, whose face was covered by a blue blob during her testimony.
Following Ted Kennedy’s emotional testimony, Kennedy Smith said of his uncle, “I think this process has been unfair to him,” Vanity Fair reported.

Michael Skakel, nephew of Robert F. Kennedy’s widow Ethel Kennedy, was convicted in 2002 of bludgeoning his neighbor, Martha Moxley to death during a jealous rage in 1975. Both were 15 at the time of the killing and lived near each other in Greenwich, Connecticut. In 2013, he was awarded a new trial and freed on bail. Three decades later, prosecutors appealed the decision and the state Supreme Court reinstated Skakel’s conviction. Skakel has asked the court to reconsider and remains free on bond.

The family had described President Kennedy’s sister Rosemary Kennedy as “intellectually slow.” In hopes of improving her life, Kennedy family patriarch Joseph P. Kennedy allowed physicians to remove part of Rosemary Kennedy’s brain in 1941, a relatively new procedure known as a prefrontal lobotomy. The operation only worsened her condition and Rosemary was institutionalized until her death in 2005 at age 86.

In 1963, President Kennedy and first lady Jacqueline Kennedy announced the birth of their third child, Patrick. Weighing just under 5 pounds, Patrick was created nearly six weeks early. Patrick fought to breathe, due to a lung condition. The baby survived for less than two weeks and was buried in the family grave site at Arlington National Cemetery near Washington.

Cancer has also played a role in Kennedy family tragedies. In 1973, Ted Kennedy’s 12-year-old son Edward Jr. lost a leg to bone cancer. “My father taught me that our most profound losses are survivable, and it’s what we do with this loss, our ability to transform it into a positive event — that is one of my father’s greatest lessons,” Edward Jr. said after his father lost his own battle with cancer in 2009.