Joseph P. Kennedy is the father of a trio of 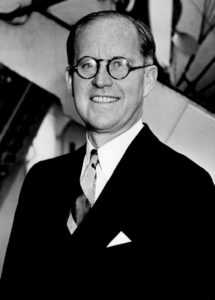 His son, John F. Kennedy, served as President of the United States. Ted Kennedy was a US Representative, and Robert F. Kennedy acted as both attorney general and also as a US senator.

Joseph Kennedy was a bank president by the age of 25 and went on to manage a shipyard and to own a movie studio. He’d made himself a million by the age of 30.

Aged 37, Kennedy  was installed as the first ever Irish American ambassador to Great Britain. He remained in this position until 1940.

Joseph Patrick Kennedy was born into an Irish Catholic family in Boston on September 6, 1888.

Despite the class prejudices that were rife during those times, Kennedy gained a place t Harvard University. It was around this time that he also fell into work managing a shipyard. He also started making sizeable contributions to the Democratic Party.

Kennedy married Rose Fitzgerald in 1914. The couple went on to have four sons and five daughters:

All of the Kennedy children were prompted to read the New York Times from a young age. At dinner time, only substantive national issues were discussed.

Already a millionaire Kennedy had an affair with actress Gloria Swanson while he was running a movie studio in the 1920s.

He retired from trading stocks aged 41, having already accumulated enough capital to create huge trust funds for all nine children.

Kennedy became the first Irish American to become the U.S. ambassador to Great Britain. This was a position he held until he resigned in 1940 believing that Britain would be overrun by Nazi Germany.

After losing his first son (Joseph P. Kennedy Jr.) in WWII, Kennedy stepped away from public life. Instead, he spent his time grooming his other sons for political office.

After a crippling stroke in 1961, Joseph P Kennedy died at the Cape Cod Kennedy Compound  on the Nantucket Sound on November 18, 1969, aged 81.